Aligning a contractor saw (with the motor hanging out the rear) can be very frustrating when done as described in most operator’s manuals. We call our solution to this problem PALS (Precision Alignment & Locking System).

PALS are designed for most saws where the motor hangs out the rear. Installing them on “hybrid” saws may prove difficult, as access to the rear housing (trunnion) may be very limited. PALS are available in 3 models, which will fit most saws with 5/16”, 3/8”, or 8MM bolts that hold the rear trunnion in position.

Hopefully, the following information will allow you to understand how the PALS are installed on the saw, and how they are used to help simplify aligning the contractor saw.

The rear trunnion on the saw has either 2 or 3 holes in it where the bolts that hold the trunnion to the bottom of the saw top pass through. (See drawing to left).

These holes are slightly elongated side-to-side to allow us too have a small amount of movement as we try to get the saw aligned.

During a “standard” alignment, one problem we have is as we tighten the bolts the trunnion can move erratically, which makes alignment very difficult. Typically, this movement is caused by the threads on the bolt rubbing on the sides of the holes, and can be in either direction, depending where contact takes place.

The PALS kit contains all of the parts you need to easily perform an alignment on the contractor saw. We provide a pair of studs (and two pairs of nuts) to replace the original bolts. Since the studs never turn as we tighten the nuts, almost all movement is eliminated. A pair of “micro-adjusting” assemblies are included, which allow you to easily make adjustments of the trunnion. 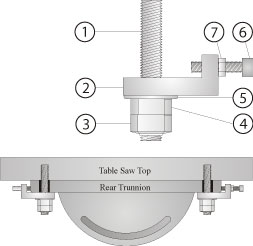 A Hex key (Allen wrench) is also included. This will be used for making adjustments of the PALS kit. When properly installed, the PALS “micro-adjusting” screws will make contact with the trunnion ends, as shown in the drawing above.

Before starting installation of the PALS kit, we recommend that you have some “semi-permanent” thread locking compound (such as blue Loc-Tite) on hand. This will be applied to the threads of the studs that will be screwed into the table saw top, and will prevent the studs from turning as you install (and adjust) the PALS kit on your saw.

Installing the PALS on the Contractor Saw

To insure you have the proper PALS kit for your saw, remove only1 bolt from the rear trunnion of the saw. Remove the staples that hold the clear plastic cover on the PALS package, and slide the information card out of the cover. Open the clear plastic bag that contains the PALS hardware, and thread one of the hex nuts in the PALS kit onto the bolt to confirm the threads match. If the nut threads on easily, you have the correct kit. If you can’t thread the nut onto the bolt, you have the wrong kit for you saw.

Step 1. Thread one of the hex nuts (4) onto each of the studs. They should be approximately1/2” from the end of the studs.

Step 2. Wrap a piece of cloth around the stud to protect the threads from damage. Using pliers to hold the stud, thread one of the Nylon insert lock nuts (3) onto each stud until about 1/16” of the stud is visible below the lock nut.

Step 3. Thread the hex nut toward the lock nut, and lightly tighten them together.

Step 4. Slip the flat washer (5)onto the stud, against the top of the hex nut.

Step 5. Install one lock nut (7) onto each “micro adjusting” screw (6). The nut should be about centered on the threads of the screw.

Step 7. Slip the “L” bracket onto the stud, making contact with the top of the flat washer.

When I installed the “prototype” PALS on my contractor saws, I wanted to make sure that I did everything I could to
make the procedure as easy as possible. Since the movement of the original bolts contributed to the trunnion moving, I
wanted to insure that the studs couldn’t turn as I tightened the nuts on the PALS.

I doubt that you would ever see a case where you need to remove the studs from the saw, but to insure that you can (if you need to), I strongly recommend that you use a “semi-permanent” thread locking compound. I used blue “loc-tite”
when I installed the studs.

I strongly recommend that you only apply 2 or 3 drops to the threads toward the end of the stud that will be threaded into the table saw top. More material on the stud will only make it more difficult to remove the stud, if necessary.

Step 8. Apply thread locking compound to 1 stud, and thread the stud into the saw top. Make sure the “L” bracket is positioned so the “micro adjusting” screw is toward the outside of the trunnion. “Finger tighten” the stud. Don’t over-tighten the stud. That could cause the threads in the “L” to strip out as you try to make your adjustments.

Step 9. Remove the original bolt from the other side of the trunnion, and repeat Step 8.

I like to give the thread locking compound the time to “set” before I start aligning a saw, and usually give it 15-20 minutes before I make any adjustments. You can, however, start checking the alignment of the saw. If you would like any guidance as to how the alignment should be done, go to our videos and manuals on table saw alignment.

One thing that you need to remember is which way the “micro adjusting” screws need to be turned to make the correct adjustment on the saw.

As you stand at the rear of the saw:

This site uses cookies. By continuing to browse the site, you are agreeing to our use of cookies.

We may request cookies to be set on your device. We use cookies to let us know when you visit our websites, how you interact with us, to enrich your user experience, and to customize your relationship with our website.

Click on the different category headings to find out more. You can also change some of your preferences. Note that blocking some types of cookies may impact your experience on our websites and the services we are able to offer.

These cookies are strictly necessary to provide you with services available through our website and to use some of its features.

Because these cookies are strictly necessary to deliver the website, refusing them will have impact how our site functions. You always can block or delete cookies by changing your browser settings and force blocking all cookies on this website. But this will always prompt you to accept/refuse cookies when revisiting our site.

We fully respect if you want to refuse cookies but to avoid asking you again and again kindly allow us to store a cookie for that. You are free to opt out any time or opt in for other cookies to get a better experience. If you refuse cookies we will remove all set cookies in our domain.

We provide you with a list of stored cookies on your computer in our domain so you can check what we stored. Due to security reasons we are not able to show or modify cookies from other domains. You can check these in your browser security settings.

These cookies collect information that is used either in aggregate form to help us understand how our website is being used or how effective our marketing campaigns are, or to help us customize our website and application for you in order to enhance your experience.

If you do not want that we track your visit to our site you can disable tracking in your browser here:

We also use different external services like Google Webfonts, Google Maps, and external Video providers. Since these providers may collect personal data like your IP address we allow you to block them here. Please be aware that this might heavily reduce the functionality and appearance of our site. Changes will take effect once you reload the page.

The following cookies are also needed - You can choose if you want to allow them: