If you have ever watched a saw blade “wobble” to a stop and wondered what is wrong with your saw, this test will help you understand what is causing the problem. 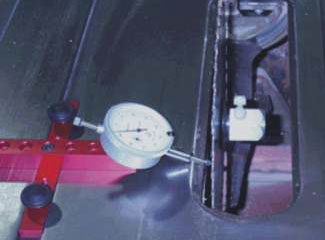 A-Line-It set up on a left tilt saw.

The “Spring and Nut” assembly required is included with the “Deluxe” kit, and can be added as an accessory to the “Standard” A-Line-It. The purpose of this assembly is to bias the saw blade securely against the arbor flange, but allow us to independently rotate either the blade or arbor.

To give you a brief overview of the purpose of these tests: If we rotate the blade, but not the arbor, the deflection of the pointer on the indicator shows the run-out of the blade.

If we rotate the arbor, but not the blade, the deflection of the pointer on the indicator shows the run-out (near the teeth) that is caused by the run-out in the arbor flange.

When making this test, I would recommend that you use the miter groove on your saw that is closest to the saw blade, as shown in the photos to the left.

In the top-left photo, you can see that the A-Line-It “Smart Bar” is installed in the left miter groove.

In the bottom-left photo, you can see that the A-Line-It “Smart Bar” is installed in the right miter groove.

By doing the tests in this manner, you should have room to get your hand near the arbor without interfering with the dial indicator.

Thoroughly clean the arbor flange and saw blade to insure there are no burrs or contamination on them that can cause improper readings as you make the following tests. Assemble the A-Line-It components as described below. 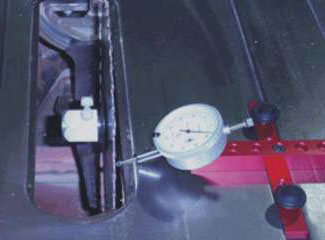 A-Line-It set up on a right tilt saw.

Step 1. Install the 2 nylon locking screws into the nut, making sure they do not extend into the center hole in the knob.

Step 2. Install the spring into the large countersunk hole in the knob.

Step 3. Place a blade on the arbor, and install the blade washer. Do not install the factory arbor nut.

Step 6. Assemble the A-Line-It as shown in the appropriate photo above, and position it in the miter groove on the saw. Rotate the indicator tip downward, without making contact with the table saw top.

The following procedure will allow you to test run-out produced by the arbor flange.

Step 1. Place a small strip of wood (I’d use something about 1/8” thick by 3/4” wide, and 10” or so long) directly in front of the saw blade. The long dimension should be parallel to the blade.

Step 2. Slide the piece toward the blade, placing one end of the strip into one of the gullets (notches between the teeth) on the blade.

Step 3. Position the A-Line-It so the tip of the indicator is close (not on) to one of the teeth on the blade.

Step 4. Grasp the spring and nut assembly with one hand, and hold the strip of wood with your other hand. Rotate the arbor shaft in the normal direction of blade rotation. A tooth on the blade should catch on the strip, stopping blade rotation.

Step 6. While holding the strip, slowly rotate the arbor of the saw. The dial indicator will show you how much run-out there is near the outer edge of the blade that is caused by run-out in the arbor flange.

Though I have never been able to get “factory specs” on this subject, I wouldn’t be greatly concerned as long as the amount of run-out didn’t exceed .005” (five thousandth of an inch).

The following procedure will allow you to test run-out in your saw blades.

Step 2. Grasp the spring and nut assembly, and hold it with one hand.

Step 3. Use your other hand to slowly rotate the blade. (Be sure to take your hand off the blade frequently to insure you are getting accurate readings. The indicator will show you the amount of run-out in your blade.

One of the benefits of making the above tests is that when the tests are done, you will be able to identify the “high spot” and “low spot” of the run-out on both the arbor flange and the saw blade. If you mark the “high spot” on one, and the “low spot” on the other, you can install the blade on the arbor while indexing these 2 points together. This allows you to minimize the total amount of run-out near the teeth of the blade.

This site uses cookies. By continuing to browse the site, you are agreeing to our use of cookies.

We may request cookies to be set on your device. We use cookies to let us know when you visit our websites, how you interact with us, to enrich your user experience, and to customize your relationship with our website.

Click on the different category headings to find out more. You can also change some of your preferences. Note that blocking some types of cookies may impact your experience on our websites and the services we are able to offer.

These cookies are strictly necessary to provide you with services available through our website and to use some of its features.

Because these cookies are strictly necessary to deliver the website, refusing them will have impact how our site functions. You always can block or delete cookies by changing your browser settings and force blocking all cookies on this website. But this will always prompt you to accept/refuse cookies when revisiting our site.

We fully respect if you want to refuse cookies but to avoid asking you again and again kindly allow us to store a cookie for that. You are free to opt out any time or opt in for other cookies to get a better experience. If you refuse cookies we will remove all set cookies in our domain.

We provide you with a list of stored cookies on your computer in our domain so you can check what we stored. Due to security reasons we are not able to show or modify cookies from other domains. You can check these in your browser security settings.

These cookies collect information that is used either in aggregate form to help us understand how our website is being used or how effective our marketing campaigns are, or to help us customize our website and application for you in order to enhance your experience.

If you do not want that we track your visit to our site you can disable tracking in your browser here:

We also use different external services like Google Webfonts, Google Maps, and external Video providers. Since these providers may collect personal data like your IP address we allow you to block them here. Please be aware that this might heavily reduce the functionality and appearance of our site. Changes will take effect once you reload the page.

The following cookies are also needed - You can choose if you want to allow them: